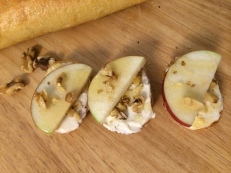 The Jewish New Year has just come and gone, and somehow things feel the same.  Crazy that the switch from September 24 to September 25 didn’t bring fireworks and glittery outfits. But alas, it did come with some semblance to its January 1st counterpart: a (food) hangover and a slice of hope for the next year.

It is customary to eat apples and honey as a symbol of hope for sweetness in the coming year, and so behold my appetizer menu take on this traditional pairing: honey whipped goat cheese crosinti with apples and walnuts.

This recipe appeared in the food section of The Boston Globe this week, so you can find it there, or you can read it here, either way it’s worth making.  And no, you don’t have to eat it only for the Jewish New Year.  Didn’t you just go apple picking? What will you do with all those apples!? Do this. It is very autumnal tasting if I do say so myself.  It takes all of 10 minutes to put together…and as the fairy-god-mother of my dreams Ina Garten says, “how easy is that?”. 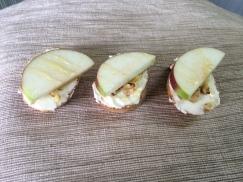 Honey is nature’s sticky golden sweetener, and one of the most versatile ingredients in a cook’s arsenal.  It easily acquaints itself with either sweet or savory preparations; and has a flavor that is distinct yet plays well with others.  The Rosh Hashanah pairing of apples & honey is this dish’s inspiration. The crostini can be served on their own as an appetizer with a glass of sparkling wine, or  as the temperature drops, alongside a warming squash soup.