Recently I went to Canada. In the winter. It was…chilly.

But the beacon of warmth came from the incredible food we found there — specifically at a bread shop called Hof Kelsten. (I found comfort in carbs.  No one is surprised).

Though most of the bread didn’t make it back over the border due to hungry travelers and the fact that it was just too good not to eat immediately, some of it did, and that some got put to good use.

Jeffrey Finkelstein, the bread whisperer responsible for Hof Kelsten, makes challahs on Fridays that are the size of a small child. Luckily their monstrousness meant I still had some upon arriving back in the States which immediately became some of the best french toast of all time.

It is such a simple luxury, and easier than you think to pull off well.  And while you don’t need Hof Kelsten challah to make this version of the breakfast classic, good eggy breads like challah and brioche are the best for french toasting. And a little Canadian maple syrup doesn’t hurt either.

4 thick slices of challah, cut in half (or other white bread, if it’s thin count 2 slices per person)
8 eggs
¾ cup of milk
½ teaspoon vanilla extract
pinch of cinnamon
pinch of salt

1. Heat a pan over medium heat.
2. Whisk together the eggs, milk, vanilla, salt, and cinnamon.
3. Soak each piece of bread through just before you put in the pan, making sure both sides are well coated.
4. Butter the pan (liberally) and cook each slice for 4 minutes on each side or until the slices are evenly browned, and no liquid is released when you press on the center of the bread.
5. Serve HOT with maple syrup. And if you’re feeling dangerous, a dusting of powdered sugar. 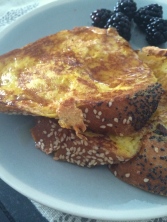